You are here: Home / Research / Animal and laboratory experiments

Experiments in the laboratory, on whole animals or on cells, are one of the three main strands of evidence used to assess health effects, alongside epidemiology and consideration of mechanisms.

Broadly speaking, laboratory studies do not support there being health effects of EMFs.  The suggestions that there are health effects come mainly from the epidemiology.

Experiments on whole animals, mice and rats in particular, are a standard way of assessing whether an agent causes cancer.  Scientists set high store on these experiments.  Over the years, most agents that cause cancer in humans have also done so in animals, and few agents that have been negative on animals have turned out to be positive on humans.  So results from experiments on animals are regarded as a strong pointer to likely effects or absence of effects in humans.

Several such experiments have been performed with normal mice and rats, several more with animals genetically modified to make them more sensitive, and even more looking for combined effects of EMFs and other agents.  These experiments have failed to find effects on cancer.  See more detail on these studies.  This is a strong piece of evidence against EMFs causing cancer, but it is not conclusive - see below. 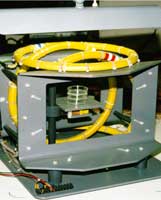 Literally hundreds, probably thousands, of experiments have been performed "in vitro" - that is, looking for effects of EMFs on cells or tissues.  Many of these studies have reported positive findings.  But when other scientists have tried to replicate these results, they have usually been unable to do so.

Some scientists are not particularly bothered by this failure to replicate results.  They believe the results could be dependent on very specific circumstances, and the replication did not reproduce exactly those circumstances.

But many scientists, and in particular the authoritative scientific review groups, look at the totality of the results and see a failure to produce any robust, replicable result.  Further, the continued failure to replicate reported results makes scientists, quite properly, more sceptical each time a new finding is reported.

Could EMFs cause cancer despite the negative animal studies?

Normally, we would regard the negative animal studies as strong evidence against EMFs causing cancer.  But could it be possible for EMFs to cause cancer in humans despite not doing so in laboratory animals?  There are two ways that in principle this could happen.

Overall, the negative evidence from the laboratory remains a strong piece of evidence against EMFs causing cancer.  But it cannot be conclusive.

Mice and rats are usually pretty good models for testing cancer.  Most agents that cause cancer in humans will cause at least one type of cancer in mice and rats.  And EMFs have been tested not just on normal rodents but on rodents genetically modified to make them particularly sensitive to leukaemia.  But mice and rats do not develop the type of leukaemia that is commonest in children, Acute Lymphoblastic Leukaemia (ALL).  So it is theoretically possible that mice and rats do not get cancer when exposed to EMFs because the mechanism is very precise to this particular form of leukaemia.

The fields that are used in laboratory studies tend to be fairly straightforward sinewaves at 50 Hz or 60 Hz.  Sometimes they have been intermittent as well as continuous, and sometimes laboratory studies have used particular polarisations or combinations of AC and DC fields.  But real-life exposures of humans are more complicated - they involve harmonics, transients, intermittency, and variable polarisation and direction.  So it is theoretically possible that the effect depends on some very particular characteristic of the exposure which occurs for humans in real life but has not been reproduced in the laboratory.