You are here: Home / Sources / Overhead power lines / Fields from power lines – more detail on the physics / Power law variations in the field from a power line

All fields fall with distance from the source. It is often convenient to express this as a power law: the field falls as the inverse "nth" power of distance.

For power lines we often use the following simplifications:

These are only simplifications and in the rest of this page we give more detail. Note that in every case the field still falls with distance - we are just discussing how rapidly it falls.

Consider first a double-circuit powerline with one circuit each side of the line, each in an exactly vertical array. When we are close to the conductors the power-law approximations break down. But when we are distant from the conductors an amount about equal to the spacing of the conductors, the field starts falling as a power law. With untransposed phasing we expect the fields to fall as the inverse square of distance - n=2. If we measure distance from the centre of the group of conductors, then this is indeed the case, as shown in this graph: 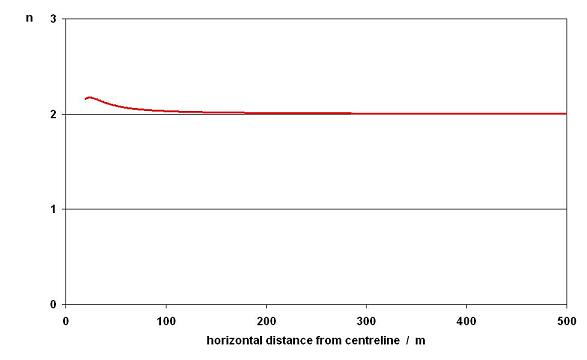 In practice, we don't measure distance from the centre of the group of conductors, we usually measure it horizontally along the ground. This changes the power law slightly at closer distances but at larger distances it makes little difference and the power is still n=2: 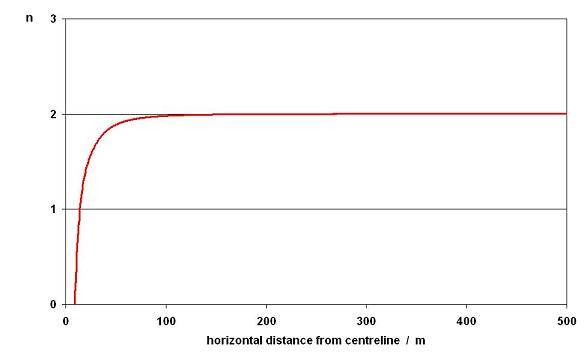 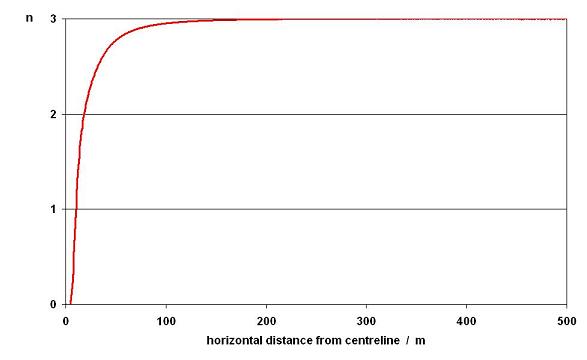 This is still a little bit idealised. Firstly, most power lines don't have the conductors in exactly vertical arrays: they slope in slightly to the top (see picture here). This means the cancellation between the two circuits that transposed phasing produces is not perfect and n becomes a bit less than 3: 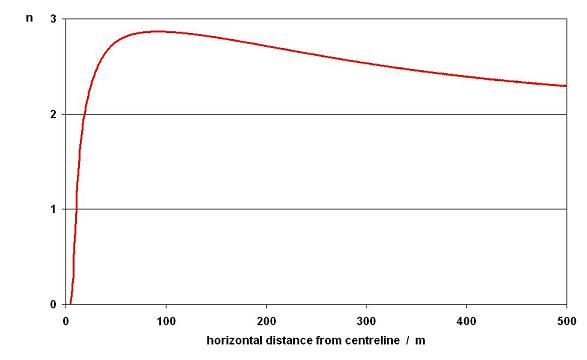 In more detail: the field produced by each circuit is a horizontal dipole (n=2). With sloping circuits, the dipole can be resolved into two dipoles: the larger one still horizontal and a smaller vertical one expressing the small amount of slope. The horizontal components from the two circuits are exactly anti-parallel: this produces a quadrupole with n=3. The two small vertical components are parallel and produce a dipole with n=2. At smaller distances this dipole field is small compared to the quadrupole component and overall n is still close to 3. But at large distances, the n=2 dipole component, which falls more slowly with distance, ends up dominating the field and n tends towards 2.

Next, the currents in the two circuits may not be exactly equal, which again means the cancellation is not perfect. This graph shows what happens with a real power line (sloping in at the top) and unbalanced currents (in the ratio 3:2): 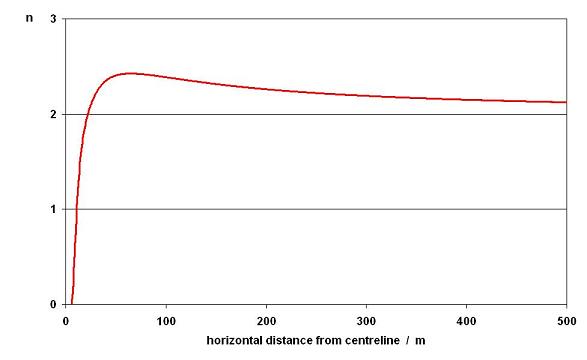 Finally, in real circuits, the currents within the circuit may not be perfectly balanced either, usually expressed as there being a "zero sequence current". This graph shows the power law for the actual currents measured in one particular power line (the same one as here): 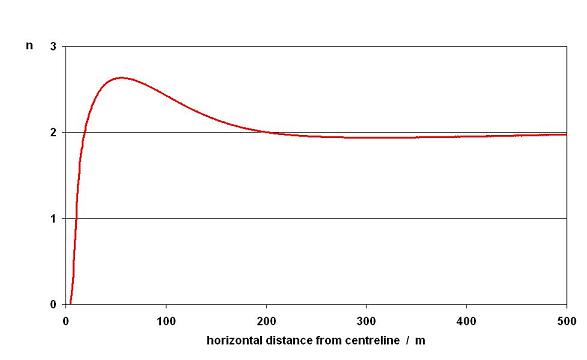