A National Grid substation is a large installation where 275 kV and 400 kV overhead power lines or underground cables are switched and where electricity is transformed to 132 kV for distribution to surrounding areas.  Each substation can be a hundred metres or more across and is surrounded by a metal fence (a few are indoors in suitably large buildings).

Normally, the field from the equipment inside a substation does not extend much if at all beyond the perimeter fence - the field outside the perimeter comes from the overhead lines or underground cables entering or leaving the substation.

Large National Grid substations do not produce significant electric fields outside their boundary because the perimeter fence screens the electric field from any sources within the substation.

This diagram was produced in the 1980s after extensive measurements in a 400 kV substation chosen because the arrangement of busbars was likely to produce the highest field possible. 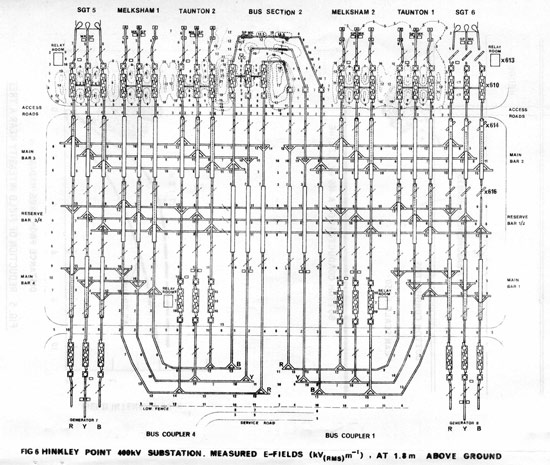 It is not very clear to see (click on the diagram for a hi-res version if you want to see all the numbers), but in most regions, the field is between 5 and 10 kV/m.  But in small regions where the busbars reinforce each other, the field rose to 21 kV/m: 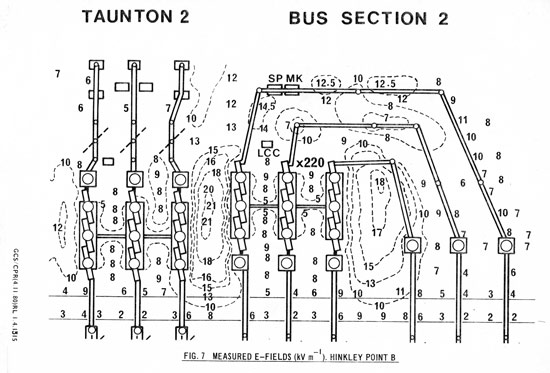 Note that these readings were taken at head height, 1.8 m above ground.  The standard now for assessing fields is 1 m above ground, where the fields would be slightly lower.

Substations become very complicated, with many different sections of conductor carrying currents in different directions, and calculating the fields from them gets very complex.  We illustrate the fields produced by an unusually simple example (actually Birkenhead Substation).  One double-circuit enters the substation, and through a simple arrangement of busbars and switchgear is connected to three transformers (only two operating under the conditions of this modelling).  The current leaves the substation through busbars (to an adjoining 132 kV substation, though this is not included in our model).

The following contour plot shows the magnetic fields produced by this simple arrangement, for a typical load flowing into the substation of 1300 A:

This confirms that the highest fields at the closest public approach (the perimeter fence) are where the overhead line enters the substation.  The fields under the busbars crossing the perimeter fence are slightly higher, because these busbars are at a lower clearance than the overhead line, but this is not a publicly accessible area.  All these fields are well below the public exposure limits.