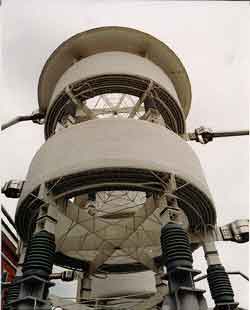 Some high-voltage substations contain large air-cored "reactors" (a reactor in this context is just a large coil).  These can be used as part of a Static Var Compensator (SVC).  This is a way of adding either capacitance or inductance to the electricity system, depending on which is needed.  The air-cored reactors provide the inductance.  They can also be used as filters to filter out particular unwanted frequencies.  For more on reactance, inductance etc see our tutorial on power systems.

They produce large magnetic fields.  Directly underneath the coils, the magnetic field can be ten millitesla or more.  The field obviously depends on the current, which is variable, depending on the needs of the electricity system at the time.  This contour plot shows typical maximum magnetic fields from an SVC with a set of three pairs of coils (the photo shows just one of these pairs):

These fields exceed both the occupational and the public exposure limits in the UK.