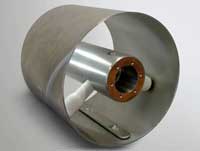 Gas Insulated Lines (GIL) are a method of burying high-voltage cables.  GIL consists of a tubular aluminium conductor to carry the current, enclosed in a rigid metallic tube that is filled with an insulating gas (sulphur hexafluoride or a mixture of nitrogen and sulphur hexafluoride gases).  It has particular advantages where very high powers are required and has been used in a few places worldwide, though not yet in the UK.

With GIL, a return current, almost equal and opposite to the load current in the central conductor, flows back through the sheath.  This provides a large degree of cancellation of the magnetic field.  Because the sheath current is not exactly equal and opposite, the cancellation is not perfect, and there is still a resultant magnetic field, but it is lower than from a conventional underground cable where the sheath currents are small.  The following graph shows this for a single circuit cable carrying a standard 500 A, using figures for the sheath currents calculated by the manufacturer, Siemens, and compared to a standard UK direct buried cable, also single-circuit carrying 500 A.