When high-voltage underground cables are buried underground, each cable is surrounded by a metal sheath to provide mechanical protection.  This eliminates the electric field outside the cable, but it has no effect on the magnetic field.  The size of the magetic field is determined by the geometry of the conductors.

However, if there is a strong enough reason for doing so, it is possible to place a screen made of magnetic material around all the separate conductors that make up the circuit.  This then reduces the magnetic field. more on screening

This is not something undertaken lightly.  It requires a substantial amount of metal in the screen, it makes laying the cable more difficult, and it can reduce the rating of the cable by making it harder for the heat produced in the cable to conduct away.  It has never been done in the UK.  UK cables comply with the relevant exposure limits without any screen, so there is no legal or regulatory basis for incurring extra expense to reduce the field further.  But it has been done in at least some places in Italy, to achieve compliance with the more restrictive exposure limits there. See the following pictures (there is also a report describing the project but the link to it has been removed, presumably for copyright reasons): 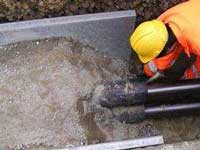 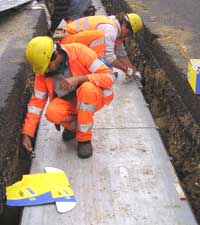