You are here: Home / What are EMFs / Magnetic fields

Magnetic fields are usually measured in microteslas (µT) or nanoteslas (nT). One nanotesla is one thousandth of a microtesla . more on units

The Earth's natural magnetic field is approximately 50 µT in the UK.

Anything which uses or carries mains electricity is potentially a source of power-frequency magnetic fields, which modulate the Earth's steady natural fields. The strength of the magnetic-field modulation depends on the current (often referred to as the load) carried by the equipment. In the case of a power line, this varies according to the demand for power at any given time. 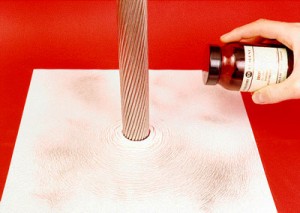 You can see the magnetic field from a 50 Hz current by sprinkling iron filings on a piece of paper, just as we all did with a bar magnet in physics lessons at school.  But the field is a lot weaker.  To get this picture, we had to pass 5000 amps through the conductor, and even then you can barely make out the field lines.  The field lines from a single current form concentric circles - contrast this with the complex pattern created when you have multiple currents on a real power line.

There are two ways of assessing the magnetic field - magnetic flux density, B, and magnetic field strength, H.  Most of the time we don't need to worry about the difference and can just refer generically to the "magnetic field" - see a full explanation