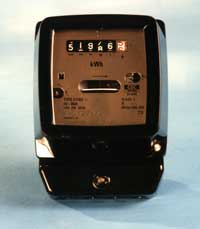 This page deals with the EMFs produced by traditional electricity meters, like the UK rotating-disc meter in the picture, or digital versions.  See also separate information on Smart Meters.

How do they produce a field?

Rotating-disc meters operate by having two coils, a voltage coil and a current coil.  The disc is driven round by the product of these two coils, hence producing a reading of voltage x current or power.

Most of the magnetic field is confined within the magnetic path of the meter, but some of the field from each coil escapes, mainly from the gap that the disc rotates through.  The voltage coil always produces roughly the same field (because the voltage is roughly constant), so the meter still produces a field even when no electricity is being used in the house.  The current coil produces a field that increases as the current used in the house increases.

How does the total field vary with load?

Below about 10 A, the total field is dominated by the field from the voltage coil.  Above about 10 A, the field from the current coil takes over, and the overall field then goes up linearly with load.  But bear in mind that in most houses a typical electricity use would be just a few amps.  The following graph shows this increase in field with load (measured at 0.5 m away in front of the meter):

How does the field vary with distance?

Like any source of field, the field from a meter falls off with distance.  And like any compact source of field such as an appliance, the field falls quite rapidly, roughly as distance cubed, as shown on this graph (again, measured from the front of the meter - the field in different directions can be different because of the alignment of the coils):

How does the field vary from meter to meter?

Most rotating-disc meters are pretty similar - the field seems to vary by a few tens of percent from model to model.  But digital meters, which do not have a rotating disc and the coils driving it, produce fields around ten times lower.

Exposure from an electricity meter

An electricity meter produces no higher field than many appliances, in fact lower than some.  And usually, people do not spend extended time close enough to a meter to be in the region of elevated field it produces.  But it is possible for a meter to be on the other side of the wall from a living space or bedroom, and, exceptionally, this could put a person in the elevated field for an extended period.